From 2001. The 2nd album by The Mercy Cage, originally released on CD by Mediatrix Publishing. A conceptual, harrowing, lo-fi exploration of addiction, trauma & consequence.

“This the second full-length release from New Zealand darkwave act The Mercy Cage. The songs here contain the same mixture of excellent drum programming, deep, emotive vocals, & haunted instrumentation that has served TMC well so far, but add a certain depth that was missing in earlier work. Although there’s a wide range of variety in the songs, the album flows smoothly, pulling you along with it from one song to the next… There is a tangible ‘feel’ to the whole thing that just makes it that much better. A few highlights: “The Valium Whip”… It has all the necessary requirements of a great song – catchy synth lines, great vox, & an all around intense feel. “Needle Marks (& Scars)” is another great track, with some of the best programming on the whole album. The intro leads you in with semi-spooky bells & pads, then breaks into the verse with a hard, distorted beat & a cool call/response vocal effect. “Raining Over Vegas” is chock full of cool electro-sounds & vocal effects, with a slightly mellower feel than the previous two. Though I’m usually not a big fan of female vocals, their presence in this song (and others on the album) feels ‘right’… I could go on & on about this disc, it really is an impressive piece of work. Fans of any form of dark electronic music should check this one out- I’m willing to bet you won’t be disappointed.”
– System Interrupted [U.S.A]

“A 17 track CD which follows a conceptually written story. The tracks are very original dark atmospheres, elektro-industrial, powered by machines programmed to keep the dance floors of the apocalypse churning coldwave, electronica, ambience and industrial into a nice mix.”
– EBM.gr [Greece]

“These guys have done a great job of compiling dark dance beats, dark electronic sounds and a great touch of doom. The vocals on the CD are understandable and clear however they take the backseat to some good well programmed electronic sounds. There is a wide range of variety across the tracks on this CD which definitely makes for a more attractive package. Stand out tracks on the CD for me were “Needle Marks [& Scars]” and “The Valium Whip”, both containing well developed synth lines combined with good beats and, in parts, hard distorted sounds… Most darkwave fans that like a slightly harder edge will really enjoy this CD; while these guys aren’t hitting it big just yet, they will grow a strong following in time. Overall it’s a great mix of goth/darkwave/EBM and I am glad I had the pleasure to review it. I look forward to new releases.
– FIEND Magazine [Australia]

“Hailing from New Zealand, The Mercy Cage is one of the most stunning electro-industrial artists on the stage of this growing genre, finding a home in every corner of the known world with their distinctly dark and acidly mesmerizing style. Their current CD release, “Rust: A Fiction” exhibits a sweeping, entrancing and incendiary movement that is unlike any music anywhere on the market, irrespective of genre.”
– BLC Music [U.S.A]

“The Mercy Cage have succeeded at producing danceable electro-darkwave tracks. The music roots itself into an electronic foundation, but manages to bring in hints of classic gothic sound and industrial elements. The results are tracks with high energy, dark sound and infectious grooves. Electronically manipulated voices, warped in a variety of ways… steady, march-like beats move effortlessly along with an assortment of waves to build a space of its own… Strange piano melodies are dropped in places and sometimes intense organ storms through with menacing urgency. Fatter sounds take part in many tracks, giving the music a bigger sound that can be quite reminiscent of trance – even more perfect for dance floors. It would be quite easy to become lost in the music while dancing away the night.”
– Sublevel203.com [U.S.A]

Undiscovered pleasures
Undivided by the pain
These petty things
That infect us…
Too complicated
Just punching it through
To concentrate on, & exonerate you

Too many mirrors built to crack
Too many warehouses made of stone
To all join hands, of skins & hearts
& sing the same song
Some dispute over product
Some dispute over sale
The means to an end
Mean this vanitys stale
You’re wearing this faith
Like a bulletproof vest
I can slice through the armour…

It’s the same old scene this year
Checking in for minor repairs
Angel’s gone away, she pushed it an inch too far
I’ll admit i like the way you wear your marks & scars…

She screams like 1973 “I know” “I need it”
Junk makes such beautiful debris
Stay sane, at least you’ll leave a good looking corpse
Trauma claws & pretty stains All in search of brighter pain
Many voices whisper “I will end you”
Still haunted by the date Nothing left to separate
Keep breathing Inhale/exhale/exhale…

Oh, what possesses you to try & trip this….vein?

& one more time i disbelieve
Choke down the pills that Chrissi gave me & try not to think of this
Yet i wonder what possesses you to try & trip the vein?

Another chapter on the road to chemical divinity
I Know Why need it?
Three steps to co-dependency
I think you’re beautiful no matter what the needle marks say
Version 2.0, open up the wound & let it flow
It rains down, it’s something that she could never see
Raise the divine hand of withdrawal It’s just addiction after all
Depress the trigger on a gun called apathy

& i wonder what possesses you to try & trip this vein?

Living in summerland forever,
You were the first, the last & the always til you left me underground,
There’s dignity in this repression
There’s purity, in somewhere that leads anywhere but down

I could suffocate
You could smother me with love….

The architecture of convention crashes down,
I never, ever wanted you to say:
“You give me absolution, you make me whole…”

I could suffocate
You could smother me with love, again…

Angel’s in a black dress, overly made up to hide the scars
Another graveyard danse for show
I remain overcome by the fumes from the fire that stings the eyes
A funeral pyre pushing last & final goodbyes
[Replace the tape, rewind/erase]
A requiem for nothing hit…

& Christina’s in the back room swallowing days
No mystery mile, no great escape from the pain…
These are the days that never end

Flawed & Restless by design
I see this apathy pushed through
A combination of, years of pills & you
A Vague expression through default

Siphoned
Off You
Into Battle, This is war
Sadder still
This black refrain
Like violins

Another slow burn decay
A vain attempt to wash these tears & all the blood & dirt away
We’ve been down this road before, been in this straitjacket for days
With open arms
I let you in
I let you snuff the flame

Raise your hands to the heavens
We are stained by time
Take these shattered wings & fly
Traverse the divide
There exists right now my love
A certain distance between you & i
We are, set upon by the great & terrible lie
A tear upon the surface
Reflecting bent & wrong
Over fleeting shards of dreams
Don’t speak now
I understand…

Stand beneath me
Let me drink of you
This cup full of lies
With arms wide open
Arms cover everything
Like grey machines
We sleepwalk through these
Gentle acts of cruelty
Arms wide open
I covet everything
Every waking moment
Every wasted frame in time
Everyday
You let me off my knees & make me stand
smiling through this charade
Stand like nothing ever was wrong
Be my lover, be my wife
At least look me in the eye for once
& make me stand…

& so the danse begins…
These are endings
We venerate the great black god release
A weeping sore ripped open by the wire
One
More
Time
Another funeral dirge, so many vacant words
Ashes to ashes
Dust to dust
To head back into the bowels of the machine…

(Welcome To) The Underneath

Unleash the demons, too much blood on his hands
Haunted by the image of her again
She seems forever bound to echo this flawed refrain
Thru human frailty
The horror of the memory remains…

I have nothing to recant

Oh, I am stained by decisions
& hounded by the image
Somewhere past the end of you

I have nothing to repent

Like Christina said: “You were never pure without me”
In the absolving glow of twilight
[Salvation" etched in blood on the wall]
Seems symptomatic of something
[My disease]
These damnation dreams
[My release]
To live with this always & forever…

Black on black
Something automatic
Something sight unseen
I have succumbed to this before
Thru malignancy, with sympathy
With shame when words collide
Stuck on the downside…
Every time i think it’s over
[I am nameless & i am dying]
[I am blameless yet i am dying]

I could cut myself to prove that the wire is real

A shallow distance, love in remission now
While everything’s dead inside
At least the sun shines down again
In horror he fell, this well etched mask of tragedy belies
The light of a funeral for a friend…
I ripped the wound by falling over…

I wrote her name across the sky
In letters in red, ten feet high
Like vegas, rewind the tape
Press erase
Close the floodgates
A barrier to entry…

Cut-out shapes upon the floor
Oh, trace the image…

I, I envy you for your perseverance…
Some things are better left unsaid

I apologise for your perseverance
I feel like i failed you… 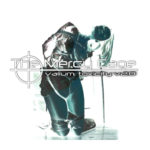 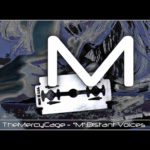 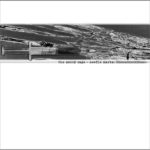 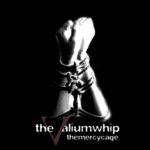